Kazakh land, beautiful nature propaganda for the purpose of presentation this site the Department of form entries, Starting today the vast expanses different regions of for the individual, I decided to conduct a systematic. and, they, in turn,, Depending on the accumulation of educational materials can be reflected in the site a few numbers.

such records to the east of the country, that is, East Kazakhstan region I am from. In this regard,, this this page The nature of the region, tourism potential, most beautiful places on articles and videos given. They were selected articles found on the Internet.

The nature of the East Kazakhstan

East Kazakhstan region — the Republic of Kazakhstan the north-eastern part of the administrative-territorial and economicografïyalıq zone. 1932 warm 10 Founded in March. 1997 distributed in the region in May Semipalatinsk region Added Territory. land area— 283 300 sq km, The number of people— 1,5 million-dye.

Kazakhstan's Pavlodar, Karagandy and Almaty regions, One region of China, Two Russian border zone. administrative Center— Oskemen City (the basis of 1720 founded in). it Astana the city 1084, but Almaty the city 1100 kilometers.

The building of the regional administration. Oskemen City

the area The climate The sharp continental, seasonal and daily temperature fluctuations can be. The spring— hot and moderately dry, and the winter will be cold and snowy. Cold slopes qoñırajay.

Irtysh river and its tributaries are of great importance in the water industry and water supply. so they Bukhtarma, Oskemen and Shulbinsky large dams and hydroelectric power station s built.

East Kazakhstan one thousand lakes have. Most of the northern and north-eastern part of the area. The region is located - Zaisanskaya and Markakol (reserved), Alakolsky and Sasykkol Kazakhstan is the largest lakes. Ölimyes, Karakul, Turangaköl, Kemïrköl and other small lakes in the south-western side of the region, Shar and often Shagan River and the rivers and Ayaguz Month hummocks, smoothing is located in a small area. 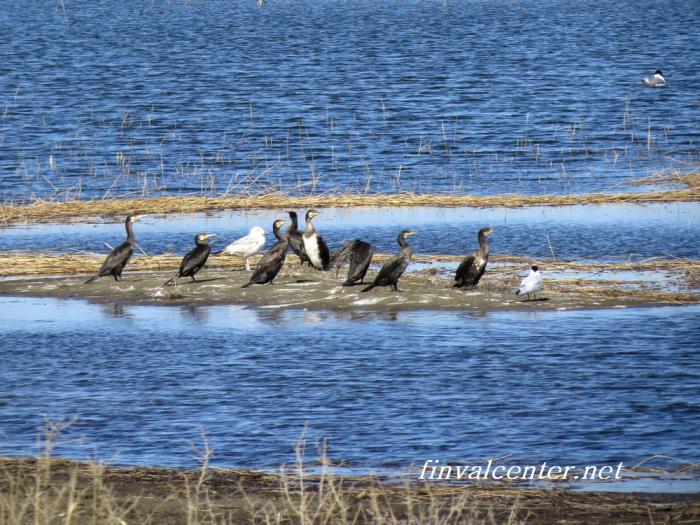 Rivers and lakes (Zaisan, Alakol, Markakol, etc.) Quite significant fishers. Mineral healing of many lakes in Altay region. East Kazakhstan region rich in underground water. It is not only the compensation of the household needs of the population and livestock watering, with a variety of mines and enterprises to provide water.

Construction of the East Kazakhstan region, the relief is a very complex.

At the same time, the total volume of the south-western Altai 99,1 sq.km. 350 There are glaciers. East Kazakhstan region is very rich in wildlife. Here, due to the different nature of the mountainous pine forests with animals, steppe and desert animals, the most common. Altai and in the forests and healthier places Priirtyshsky squirrel, aqtışqan, Kamshat eltirili expensive, such as animals and birds have a commercial value. Alakol and Zaisan localized hollows reservoirs muskrat. Irtysh and its branches, Markakol, Zaisan and Alakol, Bukhtarma Irtysh, Oskemen many species of fish and Shulbinsky bögenderinde, including sterlet, trout, harius There are a lot of valuable fish, such as. Fishing and fish processing industry, organized on the basis of their.

On the region's tourism industry

"The potential in the field of tourism development in the East Kazakhstan, There are of national importance 24 environmental protection zones total volume 1 723 072 hectares. 600-more than historical monumentsand 100-More than tourism sitesand bar.

Its unique tourism opportunities in the region. Depending on the geographical and political features that are available on a large area and clean area remained. The territory of the East Kazakhstan region is rich in natural landscapes range: soup, He gave, taiga, high mountains and many rivers and lakes.

Altai-Sayan ecological zone deserves special attention to the part of the territory of Kazakhstan Altai. Due to its unique landscape and biological diversity of this region, "WWF Living Planet" by the International Organization of two hundred (200) Into the global environmental priorities.

Which is typical for a certain region five types of tourism It should be noted, For example: Kazakhstan, Russia, China and Mongolia is located at the junction of the borders of our ölkemimiz was taken over by the diversity of the Asian desert and the Siberian taygasınıñ. ores, forests and rivers, fish, hammer, herbs, Amazingly beautiful region rich region that has long been attracting people from the business. No wonder the area is located in the large deposits of gold and polymetals also produced coal. Color and large reserves of decorative stones. Field of wheat in the region, sunflower, buckwheat good going fields ... A sheep pastures, cow, Horses graze herds. Altai mountains of the world's largest farms, held where the deer and the white deer. Zaisan, Alakolsky and Sasıqöl fresh water "sea" of hundreds of tons of fish are killed ".

Reservoir, hundreds of kilometers from the city of Oskemen, One of the three major river in Kazakhstan— Stews River built. The world's largest artificial water reservoirs. How convenient propelled ships along the Irtysh River water. Tourist hotels on the shores of the reservoir, sanatoriums, resorts and luxury villas built. Therefore, today the favorite place for locals and foreign tourists, Effectively extreme actions and emotions recreation area is ideal for rafting. Entertainment fans boat on the water, ships and yachts will be able to go. Gets clean water, can relax on the sandy beaches to absorb the sun's rays. fishing, There are good places to go hunting. 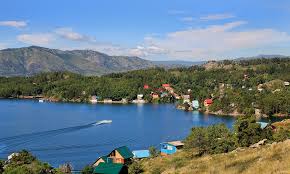 Hotels here every years, There is a growing number of sanatoriums, Camp Coast Protected. There are many valuable species of fish is caught.

Shulba view of the reservoir

Nature Lake — "Pearl of the East Kazakhstan" is. Nature National Wildlife Refuge located on the territory. It is hard to get there, natural beauty and captivating attract tourists. Transparent water of the lake is a period of days, Weather-related changes of many colors.

Many mountain water flows in Cork, There are many other sources of the purest spring and taiga forests. Jean-fauna is also very rich. mammals 55 The type and abundance of healing more than 700 types of plants. Wskwç fish— Only found in this lake in Kazakhstan.

The largest national park in Kazakhstan. UNESCO world heritage sites included in the list of a number of. in the park 3 waterfall, "The necropolis Berel" is located. 400 birds, 1,000 plants, There are more than 100 types of animal life. Rakhmanov Lake "According to the Kazakh Geographic Society" of tourists arriving in the land of Kazakh 55 included in the list of the most interesting and beautiful places. It is located in the wooded foothills. The depth of the lake 30,6 meters. There are many sources of healing thermal water source in the vicinity of the lake. In this context, natural scenic lake rocky caves, depressions between the two treatment of gastrointestinal diseases and limbs well known procedures Rakhmanov resort "source" is located. The main source of treatment resort— is a natural mineral water underground radon.

Mfolder in the world, consisting of stones, gravel and sand unique beach. The healing properties of many skin diseases AlakolTicket, as well as, the movement of the focusing action, will have a positive impact on the treatment of nervous system.

The highest point of the Altai Mountains (4509 m), One of the world's largest şıñnıñ. It is considered sacred among the population. high Sengirbay, vertical rocky reliefs, coincide with all of the glacier -, a perfect complexion of the mountains. Many climbers come from all over the world every year icebergs reached the peak.

He XVII century fortified Buddha Lounge монастыры. the founder of 1654 warm within its walls Abylai you want. The monastery was known in scientific circles. Hence, 200 So many years ago, the paper package Abılaykïtte, it is impossible to export shipment of ten horse. unfortunately, he saved the manuscripts to the present day.

The great thinker and poet WARNING "Zhidebay- Wolf "state historical-cultural and literary-memorial museum Is taking place in the center of the city of Semipalatinsk range. Sections of the Museum of Abai district: "Berry" museum-reserve and Börilide M. Auezov House Museum.

Kazakh people associated with the lyrical name of the heroes of the epic poem Rapkan Present ancient monument. 1982 In the cemetery included in the list of monuments of history and culture of the Kazakh Soviet Socialist Republic, the state protection. The largest in the East Kazakhstan region, One of the three largest mosque in the country. Three thousand people for. Residents of the region mosque, government and commercial enterprises, charitable assistance, and was sponsored by the United Arab Emirates. construction of a mosque 20 About a thousand people took part. 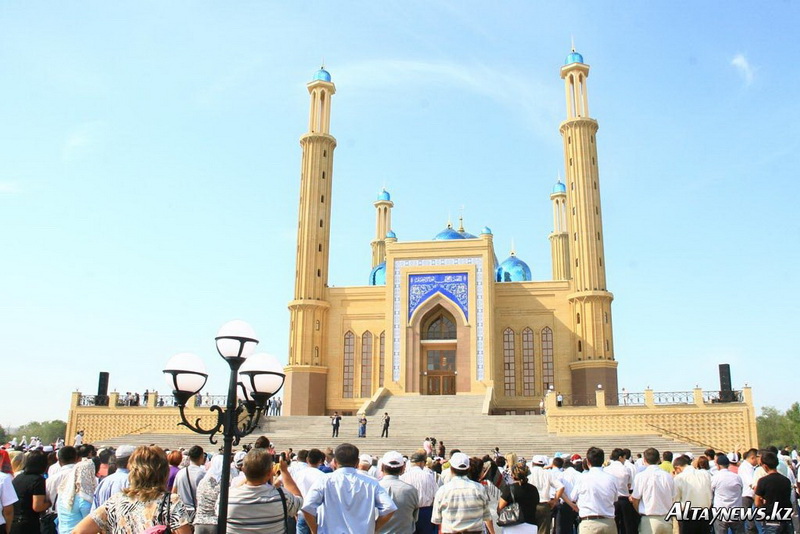 Hanging bridge over the Irtysh River — One of the attractions of the city of Semey. He ranks 17th in the world and only in Kazakhstan. "IHI" the construction of a bridge built by Japanese firm together with the Turkish firm "Alarko Alsim".

Suspension bridge in the city of Semey

At the end of the page:

This Site While the newly opened, him regular reader I would ask as sharing in the! To do so, under the terezeşege e-mail address was engizseñder!

THANK YOU! I am with SAYTIMMEN!

YOU CAN ORDER THESE BOOKS! You need to click!